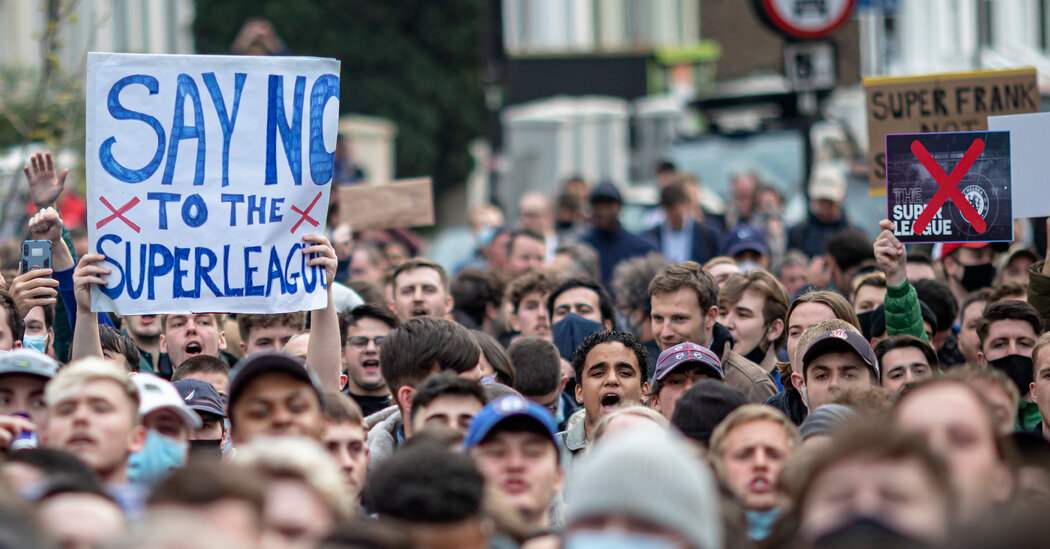 Plans for a European soccer superleague collapsed spectacularly on Tuesday as the project’s six Premier League clubs — half of the Super League’s founding members — walked away from the plan only two days after it was announced.

Manchester City, one of the six English teams that had signed up as founding members of the new Super League, was the first to confirm it was out, saying in a one-sentence statement that it had begun the process of withdrawing from the project.

Within hours, Chelsea, Manchester United, Arsenal, Tottenham Hotspur and Liverpool all signaled they, too, would decline to take part.

Soon after that, it was all over. Inter Milan was out as well, and just after midnight in Europe a top Super League official confirmed the entire project had been suspended. The league released an unsigned statement blaming outside “pressure” for its demise.

The denouement was a stunning implosion for a multibillion-dollar proposal that had prompted howls of outrage from nearly every corner of the sport since it was announced on Sunday, and the culmination of a frantic 48 hours of arguments, threats and intrigue at the highest levels of world soccer.

City’s about-face came soon after its celebrated Spanish coach, Pep Guardiola, had slammed the plans for a closed competition, saying, “It is not a sport if it doesn’t matter if you lose.” Chelsea spent the day preparing a similar reversal. It did so while its own fans held a protest march on the streets outside the club’s stadium, and while its team — reportedly in mutiny over the plan — played a Premier League match against Brighton.

Tottenham Hotspur expressed regret for taking part. Manchester United acknowledged that its fans had helped to change the club’s mind. “We have listened carefully to the reaction of our fans, the UK government and other key stakeholders,” the team said. Arsenal’s announcement came with an apology.

Earlier, Manchester United had announced that its executive vice chairman, Ed Woodward, one of the main drivers behind the Super League plan, would leave the club at the end of the year. Neither he nor the club’s co-chairman, Joel Glazer, made any reference to the Super League in a statement hailing his tenure.

The loss of the giant Premier League clubs was the death blow for the Super League, stripping it of the competitive legitimacy and relevance it had hoped would make it attractive to sponsors and broadcasters, and leaving the remaining clubs — Real Madrid, Barcelona and Atlético Madrid from Spain, and Italy’s Juventus and A.C. Milan — with little choice but to abandon the proposal.

None of those teams made a public statement about the Premier League departures, and the company organized to run the Super League did not respond to requests for comment.

Less than 24 hours earlier, Florentino Pérez, the Real Madrid president who had been named the Super League’s first chairman, had told a Spanish television interviewer that all of the clubs had signed binding contracts and could not leave. Within a day, half of them did.

The president of European soccer’s governing body, Aleksander Ceferin, hailed the announcement by Manchester City. Ceferin had fought furiously this week publicly and privately to head off the departure of the top clubs, and he had spoken in vivid terms about the sense of personal betrayal he had felt from some of their top executives.

“I am delighted to welcome City back to the European football family,” Ceferin said minutes after City’s announcement, adding, “It takes courage to admit a mistake but I have never doubted that they had the ability and common sense to make that decision.”

Other top clubs in Europe had already rejected the project. The French champions Paris St.-Germain, a deep-pocketed team that had been courted by the Super League, announced Tuesday that it would not take part. Its decision came a day after the German clubs Bayern Munich and Borussia Dortmund had gone public with their opposition. The perennial Dutch champion Ajax, a four-time winner of the Champions League, soon came out against the plan as well.

The Super League, an alliance of a dozen of the world’s best, richest and most popular teams, would have redrawn soccer’s structures and economics, and brought about one of the largest redistributions of wealth in sports history by funneling billions of dollars to a handful of clubs that would be permanent members of the new elite competition. Some of the biggest brands in soccer — including Real Madrid, Manchester United, Liverpool and Juventus — were to be part of the league.

Instead, it appeared set to fall apart amid a growing wave of internal revolt, political pressure, fan outrage, public mockery and, finally, the humbling U-turns by several of its founding teams.

European soccer officials had erupted in fury over the plans for the league over the weekend, seeing them as a direct challenge to the domestic leagues and continental competitions like the Champions League that have served as the backbone of European soccer for a century.

That outrage soon spread. Players on the prospective Super League clubs came out publicly against the plan. Coaches did little to disguise their distaste for it. And politicians in England and France pledged to oppose the plan with official action.

In Britain, Prime Minister Boris Johnson met Tuesday with fan representatives and leaders of the Premier League. Later, his office pledged to do whatever it took to stop the multibillion-dollar competition from proceeding, vowing that nothing was off the table.

“We are exploring a range of options, including legislative ones,” said Max Blain, Johnson’s spokesman.

Later in the day, hundreds of fans protesting the Super League marched on Chelsea’s stadium before its game with Brighton, a day after Liverpool fans had surrounded the team’s bus as it arrived for a game at Leeds United.

After that game, Liverpool’s coach and his players revealed that they had not been consulted about the plans, and at least one said he wanted no part of it. “I don’t like it, and hopefully it doesn’t happen,” the club veteran James Milner said.

On Tuesday, several of his teammates tweeted that sentiment simultaneously, making clear that the players were collectively opposed to Liverpool’s decision to sign on.

Chelsea, like some of the other founding clubs, had been taken aback by the strength of opposition to the proposals from its fans and the wider British public. The strength of feeling led to the team’s change of heart, according to the person with knowledge of the club’s plans.

The Guardian newspaper reported the team was forced to pull out after a revolt by players concerned they would not be able to participate for their national teams in global events like the World Cup or regional tournaments like this summer’s European Championship and the Copa América in South America.

Those threats had come from UEFA, which oversees soccer in Europe, and FIFA, the sport’s global governing body.

FIFA had warned clubs in January that it would bar them and their players from international competitions if they pressed ahead with plans for a new league, and the organization’s president, Gianni Infantino, seemed to renew that threat — without repeating it — in an address to European soccer officials on Tuesday.

“If some elect to go their own way then they must live with the consequences of their choice, they are responsible for their choice,” Infantino said in a speech in Montreux, Switzerland. “Concretely this means, either you are in, or you are out. You cannot be half in and half out. This has to be absolutely clear.”

The threat, if FIFA was to follow through, carried weight. The 12 Super League clubs employ many of the world’s top players, including the cores of the national teams of Brazil, Argentina, England, Italy, Spain France and even the United States.

Privately some of the clubs involved in the project were expressing frustration about how it had been rolled out since Sunday. A statement to announce a league that its backers said would “open a new chapter for European football” came late on Sunday as much of Europe slept.

But after the teams involved made almost no public comments, Pérez, the Real Madrid president, became the only executive involved in the scheme to defend it publicly when he appeared alone on a chat show that was broadcast at midnight Monday in Spain.

Pérez, one of the leading proponents of a superleague for years, insisted the project would benefit all of soccer, which he said was at risk of economic collapse because of the coronavirus pandemic. He did not address why so many of the clubs that have signed up to the new league had been so badly mismanaged before the pandemic struck, or make a persuasive case for how funneling even more billions of dollars in television and sponsorship revenue to a handful of top clubs would save the leagues and teams that were to be left out.

“Whenever there is a change, there are always people who oppose it,” Pérez said then. “We are doing this to save football at this critical moment.”