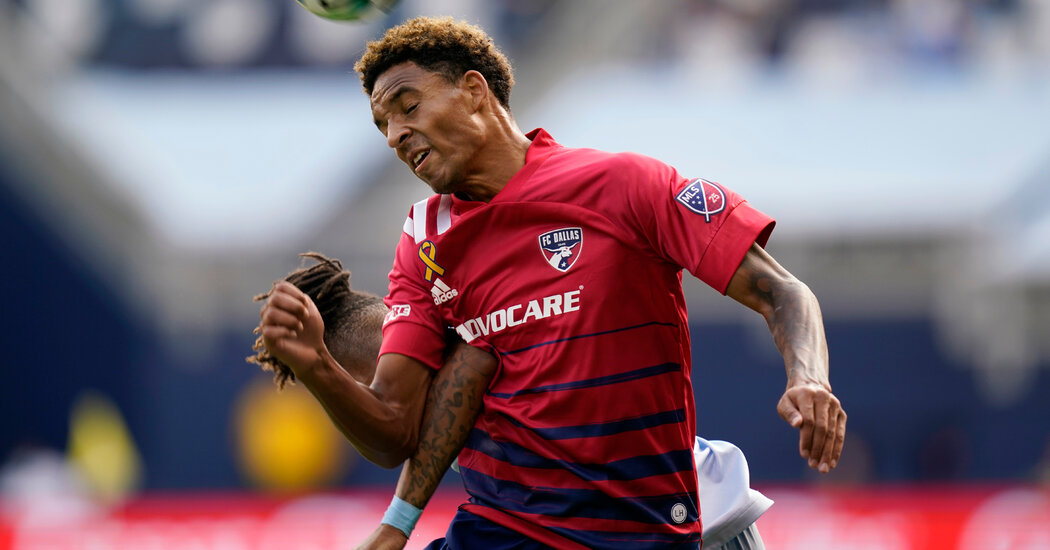 Over the last few months, André Zanotta has taken calls from teams in France, Belgium and Germany. Little in the transfer market eludes the gimlet eye of Sevilla, so the Spanish side was in touch, too. And then there were the Italians. It seemed to Zanotta that he has spoken to every major club in Serie A.

Zanotta is used to this kind of frenzy. A decade ago, he was a vice president at Santos, in his native Brazil, when a teenage Neymar was coming through. A few years later, he was at Grêmio when Arthur Melo emerged as one of South America’s brightest prospects. (Both players were eventually sold to Barcelona.)

That has long been how it works in Brazil, soccer’s great hothouse of talent, of course: Europe’s major clubs lie permanently in wait, ready to pounce when a scout or an agent or a contact alerts them to even the slightest flicker of promise. The difference, this time, was that Zanotta was taking those calls not in São Paulo or Pôrto Alegre, but Dallas.

All of the clubs contacting Zanotta — the technical director at F.C. Dallas — were doing so to ask him about the teenage right back Bryan Reynolds. At that stage, Reynolds had played only a couple of dozen games in Major League Soccer, but that had been enough to pique their curiosity.

“They loved his technical ability, his athleticism,” Zanotta said of the European suitors who called to ask about Reynolds. “They could see in his profile that he could adapt to any of the top leagues in Europe.” Eventually, two made a firm bid: Juventus and Roma. Persuaded by Roma’s coach, Paulo Fonseca, that he could offer a quicker route to first-team soccer, Reynolds chose to move to the Italian capital. Roma could eventually pay as much as $11 million for the privilege of signing him.

He is not the only young American player to have made that journey during Europe’s winter transfer window. In the past month, the Philadelphia Union sold the defender Mark McKenzie to K.R.C. Genk, in Belgium, and the midfielder Brenden Aaronson to Austria’s Red Bull Salzburg. New York City F.C.’s Joe Scally completed his long-anticipated move to Borussia Mönchengladbach, and two more, slightly older, players — Jordan Morris and Paul Arriola — joined Swansea City, in England’s second tier, too. They may collide there one day with Orlando City striker Daryl Dike; the 20-year-old agreed to a loan move to Barnsley on Monday.

Their path is, increasingly, a well-trod one: All join an American contingent in Europe that already includes Tyler Adams, Weston McKennie, Christian Pulisic, Josh Sargent and Giovanni Reyna.

“Major League Soccer used to sell players to Europe episodically,” said Dimitrios Efstathiou, M.L.S.’s senior vice president for player relations. “It would be as a result of an existing relationship between two coaches, or on the back of a good performance at the World Cup.”

Now, that has changed. “It is four, five or six every window,” said Fred Lipka, technical director of the M.L.S. Next youth development program. “And that validates the process.”

The relatively sudden transformation — of the United States in general, and M.L.S. in particular — from an afterthought in the minds of European teams into prime hunting territory has twin explanations, one from each side of the Atlantic.

From an M.L.S. perspective, it is a result of what Lipka calls “the process, a complete shift in the way players are developed” in the league over the last 14 years. In 2007, M.L.S. made a decision to invest more in its academies: not just in the facilities clubs could offer for developing players, but the type of training they received there.

“We invested in coaching education, in academy directors, in trying to ensure there was more exchange with Europe and South America, and to import best practice,” Lipka said. “There is more emphasis on technical and tactical training, not just on athletic development. To build a plane, you need to have engineers who know how to build a plane.”

Reynolds, Aaronson and many — but not all — of the rest are the fruit of that labor, their flourishing helped not only by the commitment of their clubs to allowing homegrown players to flourish — “It is in our D.N.A. to allow young players to reach the top level,” Zanotta said of F.C. Dallas, where McKennie honed his game as an academy player — but by the rising standards of the league as a whole.

“The owners have been investing more money in better signings,” Zanotta said. “So the quality of player in the league is growing, and that helps the development of the American players.” His counterpart in Philadelphia, Ernst Tanner, said the level of play in the league was only part of it; the prevalence of a “high-press, high-risk, more dynamic” style of play in M.L.S. helps, too, since teams in Europe need players who are comfortable playing precisely that way.

The European version of the story is not at odds with that, but its emphasis falls elsewhere. “I think when Christian Pulisic came over and established himself at a high level, that opened the door to other teams scouting young players in the U.S.,” said Jesse Marsch, the American coach of Red Bull Salzburg, Aaronson’s new club.

“You had Christian, Weston McKennie, Josh Sargent, Tyler Adams all having success in professional environments, and that encouraged others to go and scout earlier and earlier in America, and that meant more and more opportunities for players, especially in Germany.”

It is not, in other words, necessarily the case that European teams suddenly noticed a change in what was on offer in the American market. It is that Pulisic’s breakthrough — initially at Borussia Dortmund, and then at Chelsea — encouraged more teams to look at the market, seriously, for the first time.

Zanotta does not contest that interpretation; the transfer market, in his experience, has always been slightly inclined to follow fashion. “We have seen it here, too,” he said. “You have times when there are a lot of Argentineans doing well, or Brazilians, and that drives clubs to pay more attention to a specific market.”

The closer European teams have looked, too, the more they have found M.L.S. an easy place to do business. Rather than try to resist the predators circling its brightest prospects — or leaving its clubs to navigate the murky corners of the transfer market alone — the league has an entire department, run by Efstathiou, dedicated to helping facilitate deals.

His dozen liaison officers are in daily contact with all of M.L.S.’s 27 clubs, “keeping tabs on potential transactions, both in and out.” The league monitors and assists with deals every step of the way, both in its legal capacity as the ultimate employer of every player, and in an advisory role, offering guidance on the realities of “the wider marketplace.”

If that seems counterintuitive — that a league should be smoothing the passage of some of its brightest talents to its theoretical competitors — to Tanner, for one, it is the natural conclusion of the process. “For now, if we develop a high-level player, it is only right that we sell them to allow them to reach their full potential,” he said.

To Efstathiou, it is not only unavoidable, but beneficial. “To improve the quality on the field, we have to be full participants in the market,” he said. “That means buying, as well as selling.”

His team is not likely to see any quiet any time soon. In Philadelphia, Tanner hears “daily” from representatives of European teams, eager not to miss out on the successor to McKenzie and Aaronson. Zanotta has already fielded inquiries about players at F.C. Dallas who might replace Reynolds — or his predecessor, Reggie Cannon, now with the Portuguese club Boavista — in Texas.

He is not the only one. European clubs are monitoring the likes of Julian Araujo, a 19-year-old fullback with the Los Angeles Galaxy, and the young Real Salt Lake goalkeeper David Ochoa. Both will, most likely, be the subject of interest when the transfer market reopens this summer.

Lipka takes that as a considerable compliment, and a testament to the work M.L.S. has done in the past decade and more. He remembers a point — not so long ago — when the few American players who made it to Europe were treated with suspicion, assumed to be hard-running and hard-working but technically limited, and when the old world’s biggest clubs would not even consider the United States as a market worth tapping.

“It used to be a burden to be a young American player,” Lipka said. “Now, I think it is quite a good time.”