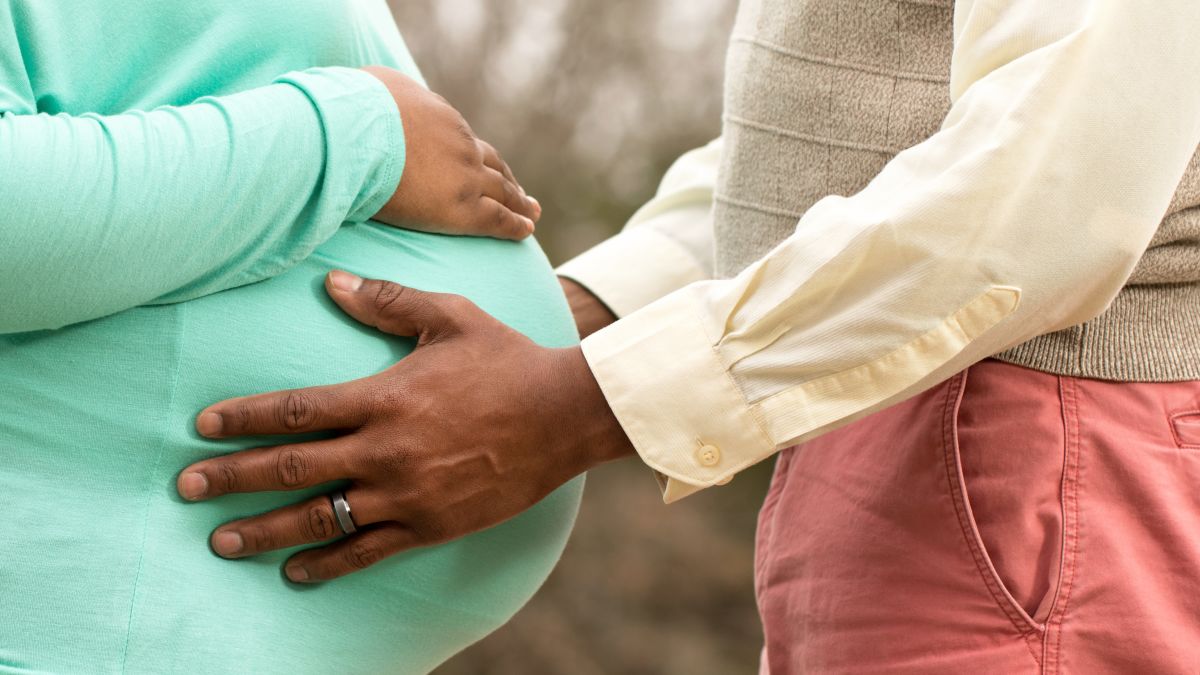 When my partner and I announced to our close family and friends that we were expecting, we soon became bombarded by one specific question: “Are you excited?” (Or my personal favorite: “Is Maliq excited?”) Maliq and I had been strategically planning to start a family for the past two years; of course we were excited. And yet, it became apparent to me pretty quickly that my display of excitement wasn’t good enough or believable to some. It made me wonder: How could I “properly” convey my excitement beyond saying that I am excited, and furthermore—why should I feel as if I have to perform to a certain level of excitement to appease others?

In all honesty, beyond being shocked and grateful that we got pregnant immediately after the removal of my IUD, and despite being healthy, I was scared at the thought of potentially having a miscarriage. At 32 years old, I knew of at least seven other thirty-something-year-olds who had experienced a miscarriage—and two of the seven had babies who were stillborn. And they’re not alone; roughly one-third of all confirmed pregnancies end in miscarriage, according to Very Well Family. Of course I was excited, but as an empath and a practical thinker, I had to accept the fact that I could be a part of that 31 percent.

As a humanities scholar, I started to unpack the intentions behind the question, “Are you excited?” And more importantly, I was interested in considering the impact of the question on an expecting parent who, in fact, may not be excited for whatever reason. I knew some of these moms personally, and the thought of their truth being dismissed because such a question is “normal” or “innocent” did not sit well with me.

Here are three reasons why you should stop asking expecting moms (and their partners) if they are excited—and what to say instead.

Consider the impact of the question on an expecting parent who, in fact, may not be excited for whatever reason.

It leaves little room for honesty and vulnerability

To start with, the question is generic. It may be perceived as light-hearted, the pregnancy equivalent of, “How’s your day going?” But it is rare that the person asking how your day is going really wants to know all the details—good or bad—about your day. The expectation is for you to answer with a response that falls in between “Pretty good,” or “Great, thanks.”

Although I believe that many people who ask pregnant women if they are excited do so with good intentions, it is one of those questions that leaves little space for an honest or vulnerable response. The answer may in fact be, “no.” Quite frankly, many of us are not prepared to handle other people’s truths, especially when they fall out of line with society’s expectations or our personal view of things.

Pregnancy produces an array of feelings

It’s also important to remember there are a multitude of emotions women experience when they are pregnant from nervous, anxious, or scared to angry or even frustrated. It is unfair to limit an expecting mom to just feelings of excitement, and it is unfair to project our personal expectations of what we think that excitement should look like.

Whether we’d like to admit it or not, asking someone if they are excited that they are pregnant is invasive. We may not be aware of how long it took the expecting mom to actually conceive, so instead of feeling excited, she feels far more nervous. We also may not be aware of how many miscarriages an expecting mom may have experienced; so instead of being excited, she may actually feel afraid to be excited and struggle with anxiety.

It should also go without saying that not every pregnancy is a planned pregnancy—and whether someone has planned their pregnancy or not is none of our business. An expectant mom who had no intention to get pregnant may be experiencing feelings of resentment, anger, or shame. An expectant mom with multiple children, whether partnered or single, is possibly trying to figure out how she is going to balance it all emotionally, financially, and physically.

It is also important to not ignore the experiences of single moms; for a single mom who is getting little support from her unborn child’s father, excitement may be one of the last emotions she feels right now. Ultimately, we ought to respect the invisible boundaries and unknown triggers of pregnant women.

What to say instead

Instead of asking expecting parents whether they are excited, consider the following options:

This open-ended question leaves space for a parent-to-be to share as much information as they want with you, and it doesn’t project one specific emotion onto them.

This response allows space for you to express how excited you are for the expectant parent. It also doesn’t require a formulaic response back from them.

“Is there anything I can do? Is anything you need to prepare for the baby?”

This response shows that you care and are willing to be a part of the expectant parent’s village. Expecting moms, in particular, can use all the support and love they can get during pregnancy from their family and friends.

“You’re going to be a great parent!”

A little reassurance can’t hurt, especially when embarking on a new journey such as parenting. It also secretly communicates to the parent-to-be that everything is going to work out just fine, should they be worried.

A simple congratulations goes a long way. It’s a time-honored, classic response, and most importantly—it is not invasive!