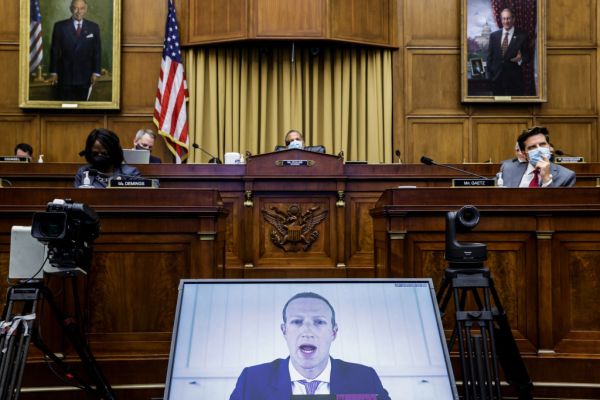 For example, citing newly revealed emails sent by Zuckerberg to other Facebook executives, Rep. Jerry Nadler declared, “Facebook saw Instagram as a powerful threat that could siphon business away from Facebook so rather than compete with it, Facebook bought it.” And Rep. Val Demings (like Nadler, a Democrat) suggested that Google was responsible for “effectively destroying anonymity on the internet.”

Spotify users are streaming again, but ad revenues still suffer due to COVID crisis — In its latest earnings report, Spotify said it grew its active monthly users by 29%, reaching 299 million.

Google One now offers free phone backups up to 15GB on Android and iOS — Google One is Google’s subscription program for buying additional storage and live support, and it’s getting an update.

Samsung reportedly considering a Google deal that would deprioritize Bixby — That’s according to Reuters.

Mirror competitor Tempo raises a $60M Series B — The news comes almost exactly a month after Mirror, one of the San Francisco-based company’s chief competitors, was acquired by fitness brand Lululemon for $500 million.

Remitly raises $85M at a $1.5B valuation, says money transfer business has surged — CEO Matt Oppenheimer told us that customer growth has increased by 200% compared to a year ago.

LA’s consumer goods rental service, Joymode, sells to the NYC retail investment firm, XRC Labs — Joymode’s founder Joe Fernandez will continue on as an advisor to the startup as it moves to pivot its business to focus on retail partnerships.

Advice and analysis from Extra Crunch

How to time your Series A fundraise — At our Early Stage event last week, Emergence Capital’s Jake Saper said that finding the right time to fundraise requires a micro- and macro-level strategy.

Where is voice tech going? — One of the biggest stories in emerging technology is the growth of different types of voice assistants.

(Reminder: Extra Crunch is our subscription membership program, which aims to democratize information about startups. You can sign up here.)

The Hummer EV is shaping up to be GM’s electric answer to the Ford Bronco and Tesla Cybertruck — GM just released its first look at the vehicle, which was announced pre-COVID, at the Super Bowl.

The Daily Crunch is TechCrunch’s roundup of our biggest and most important stories. If you’d like to get this delivered to your inbox every day at around 3pm Pacific, you can subscribe here.