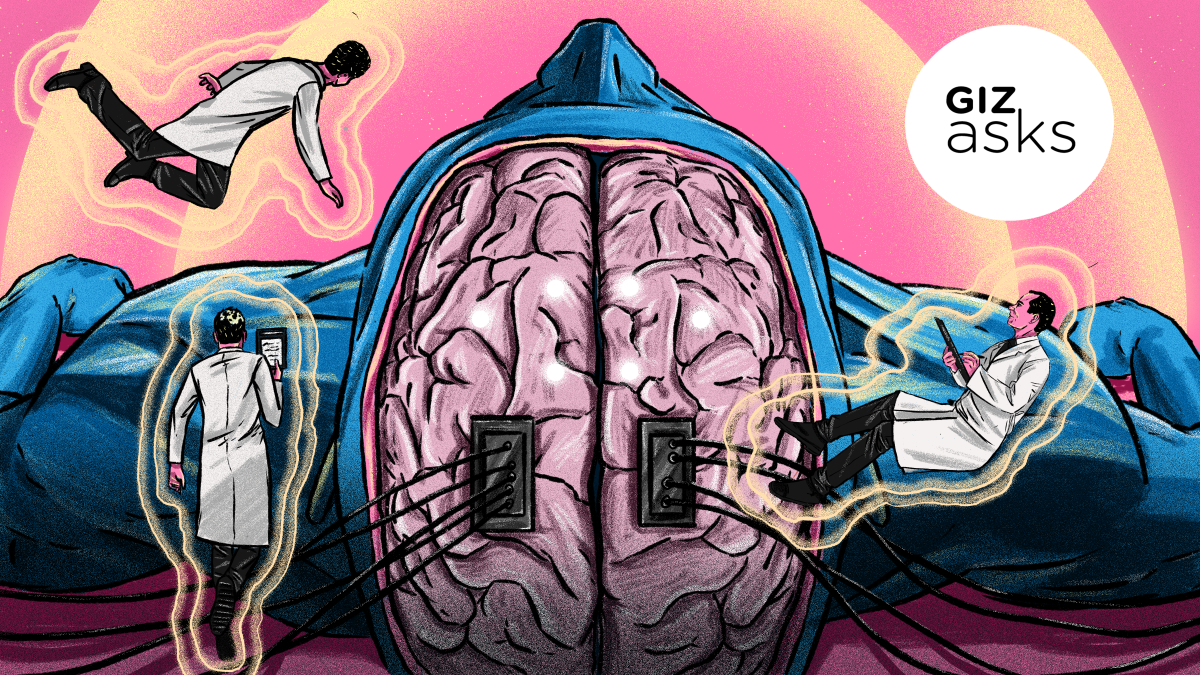 Today, when you see an eerie child lift a toy with its mind in some hackneyed ‘80s-horror homage, you can be reasonably certain that kid is supposed to be special in some way. A hundred years from now, that might not translate. A hundred years from now, kids of all kinds—fictional and non-fictional; eerie and normal—might routinely spend their Saturdays spinning furniture in the air by looking at it intensely. Whether this happens depends, of course, on the direction technology takes in the coming century—specifically, advancements in the field of brain implantation. You could ask why a team of researchers would spend millions trying to make telekinesis a reality, but the more interesting question—from our perspective, at least—is: could they? For this week’s Giz Asks, we reached out to a number of experts to find out.

To give a super academic answer: almost. The goal is to read out signals from the brain and convert those signals into some kind of action in the world. The more signals we can read out (with low noise) the more control we can exert. But there’s a big bottleneck of how much attention we can pay to how many things at once. Some of us can’t rub our bellies while patting our heads! So it’s a bit presumptuous to think we’ll be able to use our fancy future brain implants to chop vegetables in the kitchen while also pouring a drink and writing a note all at the same time.

Also, unfortunately for engineers, biology—including neurons—looks super noisy to our computers, so we can’t read out too many signals. The more noise, the worse we do in controlling devices. The last thing you want is a device that’s reading every stray electrical signal from your brain and making that move random stuff all around. But if we’re willing to go with the definition of telekinesis of “moving stuff without my body touching it” then yes!—we can do that with brain implants right now. There are consumer toys that already let you sort of do that without brain implants, using a little EEG cap that reads the total electrical signals coming from your brain’s 86 billion or so neurons to control a robot to move forward or backward or something. Heck, we’ve been able to do this for a few decades now.

But it’s also not really in the spirit of the question. What we really want is to be able to look at something and make it fly through the air like Jean Grey from the X-Men, just using the power of our minds, not put on a goofy hat to make a little RC car roll forward a little. So we can get really wild, and draw some inspiration from science fiction, like Iron Man’s Extremis Armor. This armor is directly controlled via a neural interface with Tony Stark’s brain. Now this is all theoretical speculation, but in theory, with enough tiny brain implants, we should be able to read out a lot of different signals all at once. The more we can read out, the more we can control. Imagine controlling a drone—or fleet of drones—to fly around and pick stuff up for you. This is more like “telekinesis,” but it’s still susceptible to noise. So not only will we need fancy brain implants, but smarter control systems for our drones or whatever as well.

“…unfortunately for engineers, biology—including neurons—looks super noisy to our computers, so we can’t read out too many signals.”

Associate Professor at the Department of Psychology and the Institute for Learning and Brain Sciences (I-LABS), and co-director of the Cognition and Cortical Dynamics Laboratory

It depends on what you mean by “telekinesis.” If you think of the cartoon version of “exerting force on any object, at any time, through the powers of the mind, without the mediation of any known type of mechanical or electromagnetic force,” then telekinesis is beyond the realm of physics, not just beyond the realm of brain implants.

But if you are happy with a more mundane version, in which you can exert force on any object through known physical forces, then the answer is different. If you are satisfied with calling “telekinesis” the operation of remote robotic arms through radio or wired signals, or the control of software objects (cursors on a screen, phone apps), then all of these things are certainly possible with brain implants.

And I say ‘certainly” because all of the above examples have already been done. Andy Schwarz has developed implanted electrode arrays in humans and primates that control articulated arms; Rajesh Rao has developed EEG-based interfaces that control robotic arms and even small autonomous robots altogether; Miguel Nicholelis has developed EEG-based interfaces that control exoskeletons, demonstrating how a paralyzed individual could use the exoskeleton to walk and even kick a soccer ball. Much can be done, of course; these technologies are still clunky and not portable, but they clearly show what can be achieved.

So, telekinesis might sound like magic, but, as Arthur Clarke once said, “Every sufficiently advanced technology is indistinguishable from magic.” And, although the cartoon version of telekinesis is physically impossible, a “technological” version of it (controlling objects remotely through wireless signals and brain implants) is already possible.

“If you are satisfied with calling ‘telekinesis’ the operation of remote robotic arms through radio or wired signals, or the control of software objects (cursors on a screen, phone apps), then all of these things are certainly possible with brain implants.”

Professor of Computer Science and Engineering & Electrical and Computer Engineering at the University of Washington, and Co-Director of the Center for Neurotechnology

Neuroscientist, Arizona State University, whose research focuses on how the brain learns to use sensory information in the control of skilled motor tasks

If by “telekinesis” one means causing objects to move without using the muscles, well then yes, we passed that milepost almost 20 years ago now (here is a monkey making a robot arm move with its thoughts, and here is one of many examples of people doing the same).

If one means is it possible to control movement at a greater distance, well then yes we’ve also passed that milestone (here is someone controlling a quadcopter in flight using a brain computer interface).

What this really shows is that when we talk about a brain-computer interface, we should be able to harness that interaction to exert our will over any piece of computer-controlled equipment. Obvious choices given the nature of neural engineering are robotic arms, exoskeletons, and transport like cars and wheel chairs. This is all natural, as the field has been centered on duplicating existing human capabilities as a restorative. Very little attention has been paid to other possible things to control.

BCI is not going to let us break the laws of physics, but it will enable us a more direct interface to technologies that could have an effect at distance. At present our bottlenecks are the actual nature of the interface (this is where Elon Musk is putting his money), and how to extract the electrical signals emitted by the brain and use them to create controls for various devices. Which devices we control I leave entirely to your imagination.

“…when we talk about a brain-computer interface, we should be able to harness that interaction to exert our will over any piece of computer-controlled equipment.”

Do you have a burning question for Giz Asks? Email us at tipbox@gizmodo.com.