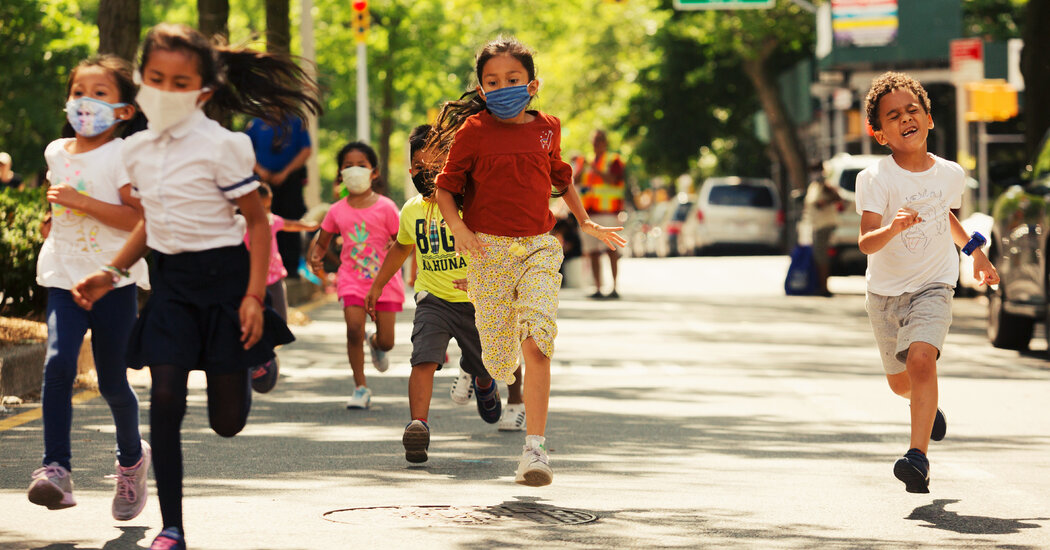 The metal barriers go up every day at 8 a.m. to keep the cars at bay.

Then 34th Avenue turns into a 1.3-mile-long block party. It serves as a connector not for vehicles but for people in a space-starved, melting pot neighborhood in Queens.

People come out for coffee breaks and stay for free classes in yoga, zumba, salsa and Mexican folk dance. Earlier this summer, a pop-up circus brought clowns, jugglers and acrobats to delight children. Dogs in rainbow-hued outfits and their owners marched together in a pride parade. One couple even got married on the avenue with a state senator officiating.

“This is a whole exercise in what is possible,” said Myrna Tinoco, 45, a social worker who roller skates on the avenue with her 6-year-old son. “At a minimum, just to have the legroom to stretch out would have been a godsend — and what we got was a little miracle.”

There is a growing revolution on the streets of New York, one of the world’s most congested cities. It is transforming public spaces that have long been the domain of cars and may turn out to be one of the most important legacies of the coronavirus pandemic.

In Queens, 34th Avenue is the city’s most celebrated open street, hailed by Mayor Bill de Blasio, transportation advocates and urban planners as the gold standard of what a modern street should look like in a sustainable and equitable city that has fewer polluting cars and more space for people. It anchors a network of dozens of miles of open streets across the city that was created in response to the outbreak and provides a tantalizing glimpse of a future of traffic-free streets.

But now a push to make 34th Avenue into a “linear park,” where cars would be permanently restricted, has provoked a backlash from some residents and drivers over what they see as an experiment gone too far.

They complain that 34th Avenue has turned into an obstacle course — with bicycles and scooters weaving around pedestrians — caused gridlock on surrounding streets and made it harder to find parking and get deliveries and services in a neighborhood where many depend on cars.

“It’s always been a quiet residential street,” said Judy Grubin, a former chair of the local community board who lives a block from 34th Avenue. “Now there’s so much turmoil and noise and traffic, we don’t know what to do anymore.”

The battle over 34th Avenue illustrates the enormous challenge of reimagining streets in New York and cities around the world once the pandemic recedes and normal life, along with traffic, returns. Just as the virus has spurred a fundamental rethinking of office work and outdoor dining, it has raised a basic question of what an urban street should be.

“The streets aren’t getting bigger,” said Hank Gutman, the city’s transportation commissioner. “We just have to get better about thinking through how to use them.”

New York has more than 6,000 miles of streets, the largest inventory of open space left in a city where developers build ever higher to gain more living space. The streets make up about 27 percent of the city’s total land area — more than in other major cities, including Los Angeles (18 percent), Boston (14 percent), and Portland, Ore. (9 percent).

All this space has largely been reserved for one purpose: to move vehicles from Point A to Point B. But the pandemic showed that streets could be used for much more, from increasing open space in poor and minority communities to reducing air pollution and supporting local businesses.

“These are the open spaces we have in our cities that everyone can access,” said Mike Lydon, a New York urban planner. “Programming them so they are not just mobility corridors is absolutely a lesson of the pandemic.”

Every night is soccer night

A dozen players chased a soccer ball across the street. They kicked it back and forth, aiming for a blue-edged net. A boy drove the ball in, drawing cheers from parents and neighbors.

The pickup soccer game has become a nightly tradition on 34th Avenue.

“Many relationships have been started and built on this open street,” said Jesse Goins, 39, a father of five. “It provides a space for the community to really come together.”

34th Avenue runs through Jackson Heights, which rose on farmland in the early 1900s and was known for its gardens and parks before an onslaught of development made it one of the city’s most space-deprived places.

More than three-quarters of the 98,000 residents are Hispanic or Asian, according to a census analysis by Social Explorer, a research company. The median household income is $60,191.

And it ranks 159th out of the city’s 188 neighborhoods in access to park space.

During the pandemic, many Jackson Heights residents had no escape, and 34th Avenue beckoned.

But Jim Burke, 55, who lives on 34th Avenue, and his neighbors wanted to show that a street for people should — and could — be run in true grass-roots fashion. Over coffee, texts and emails they plotted a takeover.

They swooped in with orange cones and sandwich boards to keep drivers from a one-block stretch. Pedestrians fanned out. Tenants of apartment buildings banged pots from their windows.

“People my age used to play in the street, but unfortunately cars kind of took over,” said Mr. Burke, a social media and e-commerce consultant. “We wanted to show people the amazing things you can do in the street.”

Though the residents’ shutdown lasted just a few hours, they were ready when the city closed the avenue in a second attempt at open streets. They formed the 34th Ave Open Streets Coalition.

Since then, the group has grown to more than 140 volunteers. Using a spreadsheet, they sign up to put up and take down barriers every day across 26 blocks of the avenue.

They have raised more than $20,000 for classes and activities. They tend the median greenery, pick up trash and help run a weekly food pantry.

Janet Bravo and her husband, Mexican immigrants, sell homemade tamales from a food truck steps from where they live. They earn $300 to $400 a day, twice as much as they did in Manhattan prepandemic. “It saved us and it continues to save us,” said Ms. Bravo, 41.

As New York begins its post-pandemic life, we explore Covid’s lasting impact on the city.

Cars are still allowed onto 34th Avenue to pick up and drop off passengers, make deliveries and park, but many drivers avoid it because there are barriers to move.

Daily pedestrian trips doubled from prepandemic levels in June 2020 and have remained higher nearly every month since, according to an analysis by StreetLight Data.

The other day Mr. Burke blew a whistle to start weekly races. Five girls and two boys took off from a blue chalk line.

“You can make it,” Mr. Burke called to the stragglers.

More than 2,500 people, including Eric Adams, the Democratic candidate for mayor, have signed a petition to make 34th Avenue a linear park with limited vehicle access.

“Everybody basically has a park right outside their door,” Mr. Burke said. “Most people are not going to want to give that up. They’re fiercely protective.”

The pandemic pushed New York and other cities to close streets for exercise and social distancing. But what was meant as a stopgap measure reinforced a broader movement to repurpose streets.

“We were able to crack open a bigger conversation,” said Gia Biagi, the Chicago transportation commissioner, who has turned over major downtown streets to arts and culture programs and outdoor dining this summer. “These seem like no-brainers now, but they were certainly not on the table until we started rolling out shared streets and outdoor dining.”

In New York, opening streets to people is not new. In the early 1900s, city officials created “play streets” for children by closing off a block or two to traffic, Mr. Lydon said.

Though Mr. de Blasio continued those efforts, he was often viewed as a pro-driver mayor before he became a champion of open streets during the pandemic.

“What the pandemic exposed was the hunger of the people of the city to reclaim the streets for the people rather than vehicles,” Mr. Gutman, the transportation commissioner, said.

Yet not all the open streets have flourished.

In north Brooklyn, drivers have essentially taken back two open streets on Driggs Avenue and Russell Street in the Greenpoint area. Barriers have been vandalized, run over and dumped into Newtown Creek.

“This is a high foot-traffic neighborhood with drivers who are getting more aggressive,” said Noel Hidalgo, a member of the North Brooklyn Open Streets Community Coalition.

34th Avenue is a test case

There is an entrenched car culture in Queens, where many neighborhoods have scant transit options, making 34th Avenue an unlikely place for a stand against cars.

Even in Jackson Heights, which has several subway lines, about 52 percent of households own one or more vehicles compared with 45 percent citywide, according to the census analysis.

And while efforts to reclaim streets often pit drivers against transit riders, in this case Mr. Burke and other 34th Avenue supporters are themselves car owners.

So the battle over 34th Avenue goes beyond whether cars or people should have priority to a debate over how an open street adds to — or detracts from — a neighborhood’s rhythms.

City officials say 34th Avenue is safer at a time when traffic fatalities have soared citywide. The number of crashes on 34th Avenue fell to 90 during the first year of the open street from an average of 148 a year during the prior three-year period.

“It’s not just about traffic, it’s about the safety of anyone using 34th Avenue,” said Gloria Contreras, 52, citing her 6-year-old daughter’s near misses with a cyclist and an electric scooter rider.

Caroline Flores-Oyola, 22, a college student, embraced the open street because “you could breathe.”

Then people got a little too comfortable, she said, taking over the street for picnics and birthday parties.

“I felt there was an abuse of the open space because there are no rules,” she said.

Ms. Flores-Oyola and other residents expressed concerns in a neighborhood Facebook group, only to be ignored or called car-lovers. Ms. Flores-Oyola, who does not own a car, was asked “if I got paid to hate on the street.”

She started a group, 34 Compromise, which has called for a host of changes, including reducing the hours and length of the open street. More than 2,000 people have signed a petition for compromise.

“We’re not against it,” said Paola Peguero, 33, a freelance photographer. “It just needs adjustments so it works for everyone.”

But supporters of 34th Avenue have resisted any changes that would diminish the open street.

“I don’t think we should compromise on this one,” said Donovan Richards, the Queens borough president. “This really is bigger than 34th Avenue.”

For Mr. Burke, the unofficial mayor of 34th Avenue, there is no going back. He greets neighbors, recruits volunteers and patrols the street in a bright orange vest.

Mr. Burke said he barely knew his neighbors before he started sharing 34th Avenue with them. Now they are some of his closest friends.

“It’s totally changed,” he said. “One of the densest parts of Queens has become a small town.”