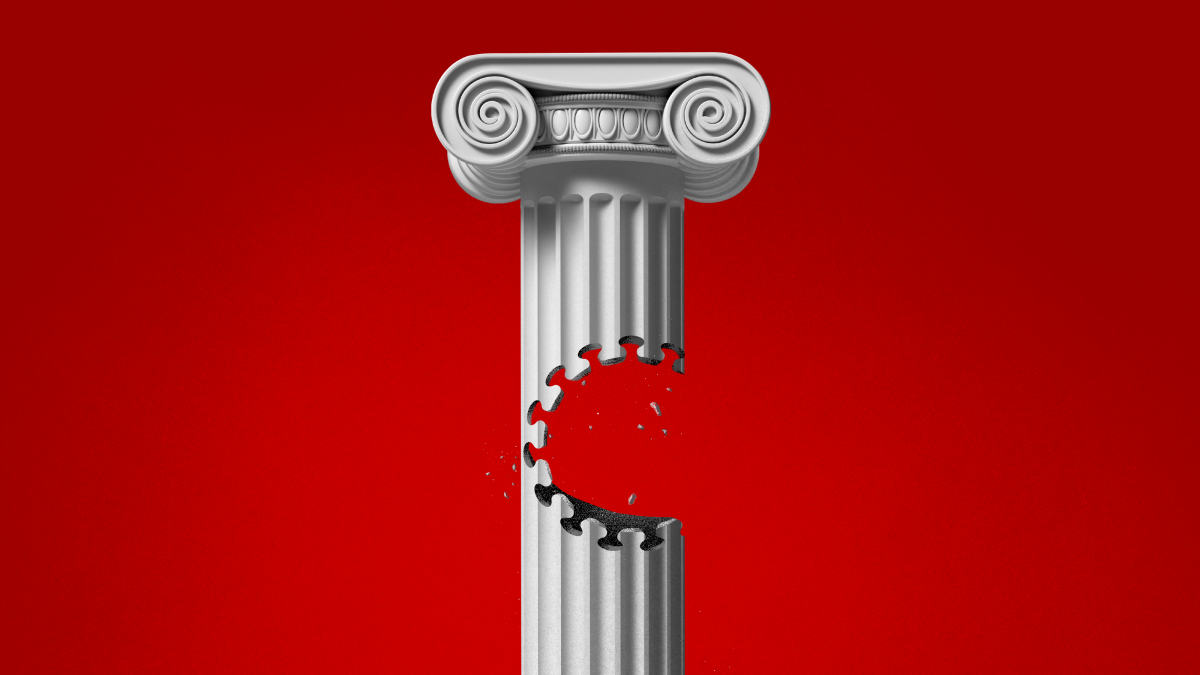 Last month, it looked like the University of Illinois at Urbana-Champaign had one of the better plans for bringing students back, which included frequent testing for everyone on campus.“If [students] had adhered to what we had asked them to do, we would have had no more than about 700 cases the entire semester,” the chancellor of the University of Illinois at Urbana-Champaign, Robert Jones, said on Vox’s podcast Today Explained

Instead, they hit that number in the first two weeks.

On the podcast, Jones referred to “a few bad actors” who nearly ruined all the university’s hard work by “doing things that we didn’t include in a model.” They did include illicit parties in their predictions—okay, good, so they know they’re dealing with college students. But they forgot that college kids don’t always answer their phones. (Positive test results were delivered by phone.) And Jones says intentionally violating quarantine or isolation orders was “something we really didn’t think was going to happen.”

Sounds like they based the safety of students on a model that wasn’t accurate. The consequences? None for the administrators, as far as I can tell. Students and student organizations were disciplined.

If your plan falls apart as soon as somebody breaks the rules, it was never a robust enough plan to protect the community.

Julia Marcus and Jessica Gold wrote in July that colleges were preparing to blame students for the outbreaks that administrators’ decisions would inevitably cause. The prediction came true in record time—before the end of August, the University of North Carolina at Chapel Hill had so many cases they sent students home. Jonathan Sauls, the vice chancellor for student affairs, spoke about “flagrant violations” and “poor judgment” on the part of students.

But whose judgment was the poorest here? I’d say that if your plan falls apart as soon as somebody breaks the rules, it was never a robust enough plan to protect the community.

Whose choices mean the most?

Individuals get to make choices, but the people in charge shape the world in which our choices are made. We look to our neighbors, our leaders, our environment to judge what our options are and what the most appropriate choices might be.

“If you don’t feel safe, don’t go,” said the governor of Iowa about a football game that looked like it would be permitted to proceed with 25,000 spectators. Those exact words have been used to defend other reopenings, like employees returning to work in the UK or voters showing up to polls in Missouri. But the flip side of that sentiment is that if you do feel safe, going is fine. It’s outsourcing a major community decision to individuals who do not have the resources to make that decision in a fully informed way.

That’s the whole reason we’re supposed to have functional public health agencies: to gather evidence and consider how people will react to recommendations, and then implement plans that stand the greatest chance of keeping everyone safe. It is unreasonable to expect every citizen to be their own epidemiologist, when the actual epidemiologists in the public health department are the ones with training to do the job properly. We end up relying on instinct, and instinct is faulty. Nothing in our lives has prepared us to make the right decisions in a pandemic.

Leadership matters because the people in charge not only make the rules, they model behavior for the rest of us. If you’re at a petting zoo, you assume each animal is there because it’s safe to pet. If a drug is available over the counter, you figure it’s probably unlikely to kill you. “Somebody responsible, with more information than me, made this decision,” we think.

When the people in charge abdicate this responsibility, they’re not giving the rest of us any more power over our lives. They’re removing useful guidance and blaming us for any harm that may befall us. As an individual, my choices—if I make the correct ones—may protect me and my family. But a leader’s choices have the potential to protect or harm thousands.

This is true on every scale. A coherent federal response might have saved hundreds of thousands of lives by now. Governors, in many cases, wasted the power that they had to control the spread of the virus within their states. Even within a circle of friends, it’s one thing to weigh whether to attend a large party. It is quite another to decide that it’s fine to throw one.

When the people in charge abdicate this responsibility, they’re not giving the rest of us any more power over our lives. They’re removing useful guidance and blaming us for any harm that may befall us.

The people in charge are making bad decisions

Instead of using the resources at their disposal to keep people safe, people in charge are attempting to preserve whatever advantages they enjoyed before the pandemic. Governors lifted lockdown orders under pressure from business owners and political rivals. Colleges reopened in person because they faced dire financial consequences if students un-enrolled and dorms stood empty. Sports are happening because sports make money.

“Typically shielded from the immediate impacts of a disaster, elites tend to be much more worried about disruption to the status quo and the loss of political capital and power [than the disaster itself],” Malka Older writes at Foreign Policy. Her essay is about the myth of public panic during disasters, but this point also explains why people in power tend to make decisions that benefit themselves, and then cast blame downward.

And we fall for it. To use panic as an example, we accused each other of hoarding toilet paper during the early pandemic, even though the actual TP shortage was not due to panic at all. With large swaths of the population now pooping at home instead of at work, toilet paper manufacturers had too many industrial rolls of toilet paper and too few of the kind we use at home. Their factories and supply chains weren’t set up to be able to switch from one to the other.

People stocked up when they could, which isn’t panic at all—it’s the logical way to respond when you know there are periodic shortages. But we complained about imaginary TP hoarders without any evidence that widespread hoarding was going on. We blamed individuals for a problem that was inherent in a system none of us had any power to control.

It’s not just leaders who are blaming people for bad individual choices: we blame each other. We fight with customers and storekeepers over masks, because mask-wearing became a personal choice that people developed strong opinions about. Imagine what could have been, if the US Postal Service had been allowed to follow through on its plan to send five masks to every household back in April. It would have been a matter of fact that masks are available and useful. (We would have found something else to fight over, but hopefully it would be something less consequential.)

Similarly, if people are passing COVID to one another at bars, they’re doing it in part because they felt like bars were safe enough to visit. Who signaled that they were safe? The people who lifted the lockdown on bars.

Similarly, if college campuses sprout COVID outbreaks, the students may have played a part—but administrators had the job of not opening the damn college if it was not safe to open the damn college. The job of risk assessment for a whole community cannot responsibly be given to individuals acting on their own, especially when those individuals are young people with still-developing brains. Often, in fact, they are the same young people who were forced back to work when lockdowns lifted, whose jobs as cashiers and servers put them at the highest risk of contracting and spreading the coronavirus. Leaders blamed them for partying then, too.

So let’s put the blame for community-level failure back where it belongs: on the leaders who have been making the biggest decisions or—more often—failing to make decisions. Behind every delayed school opening and every conference canceled at the last minute is a chickenshit leader who knew what to do to keep people safe but worried that somebody would be mad if they did it.

It’s time for the people in charge to step up, and make the call when something needs to be changed or canceled to keep people safe. Even if that decision is unpopular or—gasp—will result in a rich person losing a bit of money. And when the inevitable happens, we should stop pointing fingers at each other, and put the blame where it belongs.