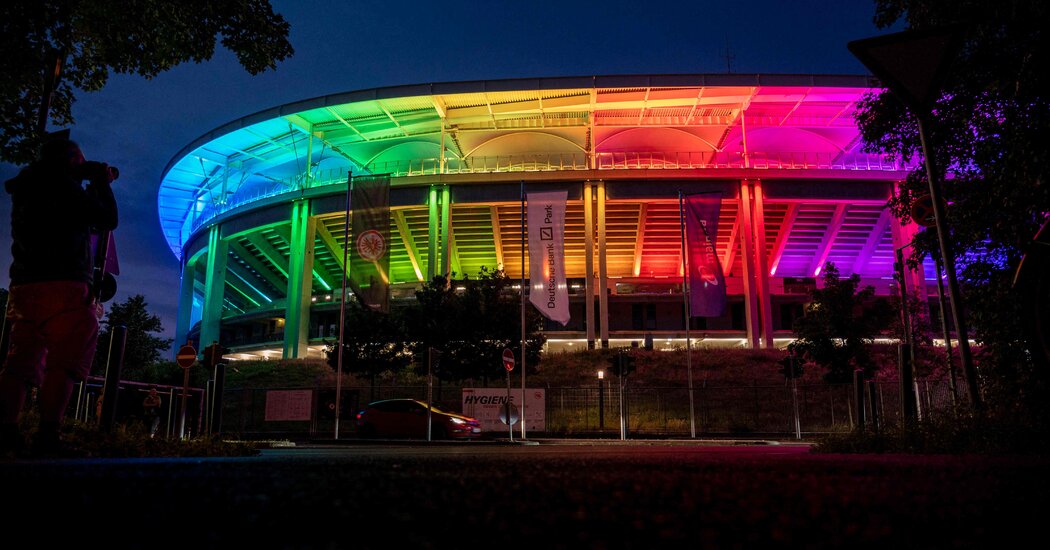 The colors of the rainbow spread, leaping from building to building and city to city, first across Germany and then out into the rest of Europe. On Wednesday evening, what might have been a lone statement — a single message of love and defiance — turned into a bright and silent chorus.

That night, Germany was scheduled to host Hungary in Munich for a crucial game in this summer’s European soccer championship. City officials had asked UEFA, the competition’s organizer, for permission to light the stadium — the Fussball-Arena Munich, more commonly known as Allianz Arena, in the rainbow colors of the Pride flag.

On Tuesday, the request was denied.

UEFA decreed that the gesture breached the organization’s rules on introducing a “political context” to soccer. Illuminating the stadium in anything other than the organization’s official turquoise and green, it ruled, was a “message aiming at a decision taken by the Hungarian national parliament” — namely, a law passed this month designed to restrict content that includes depictions of gay and transgender characters.

Rather than dull the protest, though, UEFA’s rejection served to illuminate it.

Germany’s goalkeeper and captain, Manuel Neuer, took to the field in a rainbow armband, and fans arrived for the game carrying rainbow flags and wearing rainbow wigs. One even ran onto the field during the playing of Hungary’s national anthem, triumphantly displaying a Pride flag directly in front of the Hungarian players.

The protest, though, was not limited to Munich. Teams and cities across Germany, and beyond, took it upon themselves to show their solidarity not only with Munich, but with the cause.

The colors of the rainbow bathed stadiums in Frankfurt and Düsseldorf, in the pretty Bavarian city of Augsburg and, farther north, in the company town of Wolfsburg.

In the capital, Berlin, the vast bowl of the Olympic Stadium was wreathed in colored light.

In Hamburg, the city’s opera house followed suit. So, too, did the elegant Gothic town hall that dominates the Grand Place in Brussels. Fans gathered to watch the game decked out not only in Germany jerseys and national flags, but the Pride colors, too. Clubs across Europe showed their support digitally, the rainbow touching the social media avatars of Barcelona and Juventus.

The Hungarian lawmakers who had warned of the dangers of “mixing politics and sport” got their wish. The Fussball-Arena Munich glowed in the garish official turquoise and green of UEFA. Everywhere else, the rainbow lit up the night, bright and proud, an unspoken, unyielding indictment of what had happened in Munich, where sports and politics had been allowed to mix.