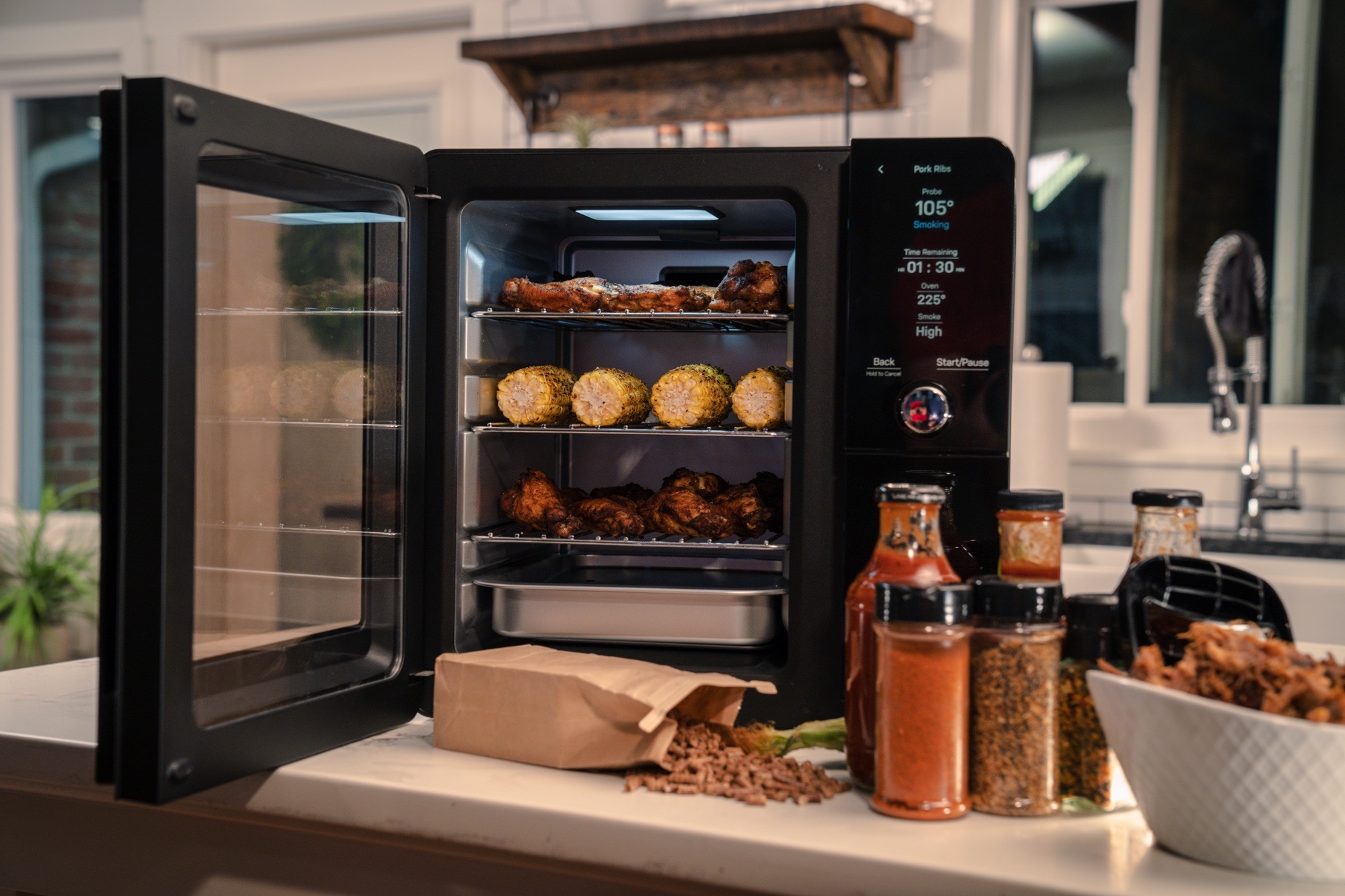 As the weather warms up, it’s time for aspiring pit masters to dust off their aprons and meat probes before heading outside for some low-and-slow cooking. Pellet grills have become a popular choice for backyard cooks as they offer the flavor of food cooked over wood with a much more convenient fuel source. However, you still have to go outside to use one, and unless you have a screened-in porch or shelter of some kind, cooking in the rain is no fun. And if you live in an apartment, chances are you can’t have a grill in the first place. FirstBuild, a product innovation lab backed by GE Appliances, has built Arden: an indoor smoker that burns wood pellets and “eliminates” the smoke so it’s safe to use in your kitchen.

Like an outdoor pellet grill, the Arden has a hopper for the fuel and burns it to produce smoke to flavor foods. The difference here is this countertop unit has a separate heating element that helps to regulate the temperature so it’s not solely relying on burning pellets to cook. FirstBuild says the Arden circulates smoke around the chamber before a “game-changing smoke-elimination technology” uses “a catalyst” to get rid of it. The company explains that the small appliance doesn’t have a filter you need to clean or replace, it just expels carbon dioxide and water vapor out of the back. Details are scarce on exactly what happens during that process, but it’s clear the thing doesn’t emit any smoke during a cook.

FirstBuild is using smoke elimination tech here that was built for the Monogram Smart Hearth Oven. That appliance is an in-wall electric unit that’s designed to mimic the performance of wood-fired brick ovens used in restaurants for pizza, baking and roasting. The company says the idea for a smoker was first implemented in an old GE fridge that had been converted to a BBQ cooker. In order to bring the device indoors to escape the weather, FirstBuild team outfitted it with the smoke trapping tech from the Hearth Oven.

The company says the smoker generated a ton of interest from its community so it asked if people would buy one and how big it needed to be. The first answer was a resounding “yes,” and the second was that it needed to fit on the counter like other kitchen appliances. Unlike the old refrigerator, the Arden is a moveable unit, so you can stash it somewhere else when its not in use — unless you really want to dedicate counter space to showing it off. Despite easy moving, it’s still quite a large thing to have out all of the time.

The Arden is about the size of a mini fridge with enough capacity for two racks of ribs, a small brisket or “an average-sized” pork butt. The device can also accommodate a whole chicken standing up on a rack or beer can. Three removable shelves allow you to fit things as needed, but based on FirstBuild’s videos, you’ll need to cut racks of ribs in half to make them fit. Cook times remain the same as outdoor smokers, so you’re looking at three to five hours for ribs and up to 12 hours for a pork butt, for example. The Arden cooks at temperatures between 185-300 degrees Fahrenheit and it allows you to use a meat probe to monitor internal temp. It can also hold foods at a certain temperature once they’re done cooking in case you can’t get to them immediately.

Since the Arden has separate heat sources for the pellets and the main heat setting, FirstBuild says the device offers more accurate overall temperature. The company says this smoker also uses a lot less pellets since they smolder for flavor instead of burning to heat an entire grill. While barbecuers seem to be impressed by the smoker flavor the Arden prototypes impart, Mad Scientist BBQ’s Jeremy Yoder noted that it’s not as “complex” in the overall profile.

According to Yoder, the smoke flavor is more on the surface, so while you can certainly taste it, it hasn’t penetrated the meat like hardwood coals or a full-size pellet grill can manage (BBQ nerds will also notice the lack of a well-defined smoke ring). Yoder did confirm that the results on pork ribs are a massive improvement over what you can get faking it in a regular oven, and they were even better than what he’d had in some restaurants. There is a smoke level adjustment on the Arden control panel, so presumably you could dial that up to fit your desired taste profile. Speaking of smoke, it’s unclear if the smoker stops smoldering pellets temporarily if you open the door during the cooking process.

Like it has in the past, FirstBuild is taking the crowdfunding approach for initial pre-orders. If you snag one via Indiegogo, the earliest devotees can secure it for $599. After that, you’ll get a $400 discount off the expected MSRP when the Arden goes on sale ($699 vs. $1,099). Prices will go up during the course of the campaign, so opting in sooner will save you some cash. The only downside to ordering early is backers will have to wait until summer 2023 to get one. However, the product lab crowdfunded the initial launch of the Opal Nugget Ice Maker in 2015 — raising over $2.5 million — so it has a history of delivering the goods. GE now offers a range of Opal machines, so it will be interesting to see what happens if the Arden hits or surpasses that mark.