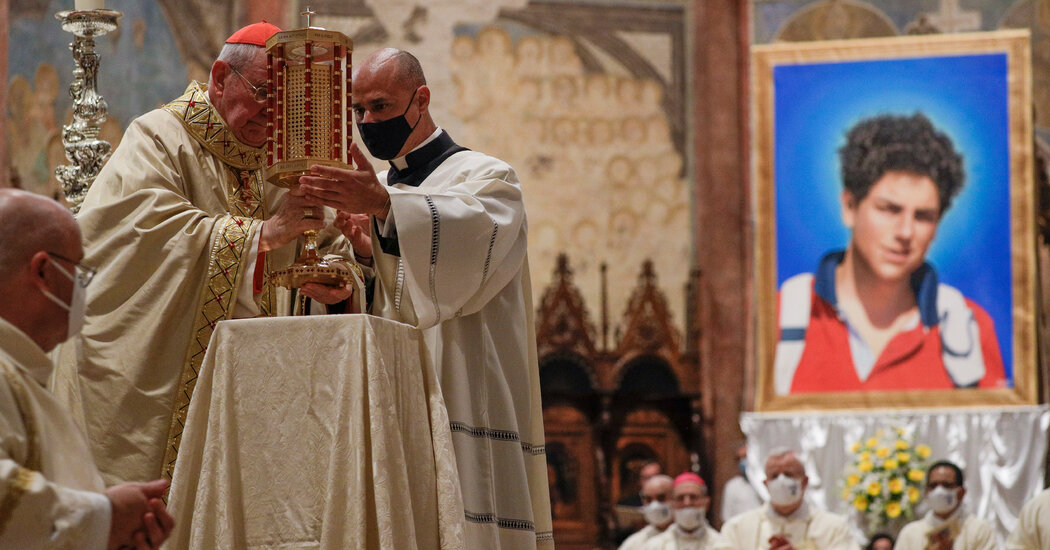 In many ways, Carlo Acutis was a typical teenager. He loved his PlayStation and making videos of his dogs. He favored Nikes and jeans, and he had a cellphone and an email address.

But in one significant respect, Carlo — who was just 15 when he died of leukemia in 2006 — stands out from his peers: He is on his way to becoming the first millennial to be recognized as a saint in the Roman Catholic Church.

Carlo, who lived in Milan, was beatified, or declared “blessed” by the pope, on Saturday after a miracle was attributed to him earlier this year. The ceremony, in Assisi, Italy, was the second-to-last step before Carlo can be canonized as a saint.

Since his death, Carlo has become known in some Catholic circles as the patron saint of the internet for his facility with computers and his early and enthusiastic embrace of the web, which he used as an expression of his Catholic faith.

When he was 9, Carlo began studying computer science textbooks and taught himself computer programming and graphic design, his mother, Antonia Acutis, said in a phone interview. In the months before his death, he created a website that cataloged miracles.

“Carlo was the light answer to the dark side of the web,” his mother said, adding that some admirers have called him an “influencer for God.”

Her son’s life, she said, “can be used to show how the internet can be used for good, to spread good things.”

After his death, the Diocese of Assisi, where his family had a second home, petitioned the Vatican to recognize Carlo as a saint. The diocese dug into his emails and computer search history, and interviewed witnesses. Then they waited for miracles.

Ms. Acutis said that people from all over the world had told her about medical miracles, including cures for infertility and cancer, that happened after they prayed to her son. In February, Pope Francis attributed the unexplainable healing of a boy with a malformed pancreas to Carlo after the child came in contact with one of his shirts.

Now that he has been beatified, Carlo could become a saint if a second verified miracle is attributed to him and is recognized by the pope. A formal canonization ceremony would follow.

If that happens, Carlo would be joining an elite group. Among the more than 10,000 saints recognized by the Roman Catholic Church, just 120 died as children or teenagers, The National Catholic Register reported in 2017.

The time between beatification and sainthood varies widely, and sainthood might not happen at all, said Kathleen Sprows Cummings, a professor of American studies and history and the director of the Cushwa Center for the Study of American Catholicism at the University of Notre Dame. For some saints, including Joan of Arc, who died when she was about 19, centuries pass between death and canonization.

Hundreds of masked devotees, including Carlo’s parents and siblings, gathered in Assisi on Saturday for his beatification ceremony, which was postponed from March because of the coronavirus. Many watched on screens that were spread throughout the town’s piazzas as a church official read a letter from Pope Francis that declared Carlo “blessed.”

“Already Carlo, he’s only just been beatified, but already he’s a worldwide phenomenon,” said Father Will Conquer, a Catholic priest and missionary in Cambodia who has written about Carlo’s path to sainthood. “What makes it so extraordinary is that he was ordinary. We’re telling people the guy you should be following is a guy very similar to you.”

Carlo’s body, which was exhumed for veneration this month, was displayed in a nearby church with his preferred wardrobe of Nikes, jeans and a sweater.

Those signs of modernity resonated with many young people who see themselves in him, said Paul Jarzembowski, who leads the U.S. Council for Catholic Bishops’ youth and young adult ministries. Carlo was not a theological writer or world leader, he said, but rather an ordinary young person with compassion, a drive to integrate faith into his daily life and “a dedication to make the world a better place.”

“He is truly a patron for our self-isolating, digitally reliant times, and for other young people who are now accompanying all of us as we enter more fully into this new normal,” Mr. Jarzembowski said.

Born in London to Italian parents, Carlo moved to Milan with his family as a child, his mother said. He enjoyed soccer and video games, including Pokémon and Mario Kart, limiting himself to one hour a week with those games, his mother said.

He was inquisitive about Catholicism from a young age, inspiring his mother, who was not a practicing Catholic at the time, to return to the faith. He attended daily Mass from the time he was 7, never missing a day, she said.

Carlo sought ways of helping poor, older and disabled people, and refugees. On the way to school, he would stop to chat with people about their problems, she said. He took meals and sleeping bags to homeless people and knew many by name.

At Carlo’s funeral, the church overflowed with people whose lives he had touched, she said.

“People are gravitating to the idea of a young person becoming a saint at a time when young people are leaving the church, becoming disenchanted with the church,” Professor Cummings said.

And, as people worry about the corrosive effects of social media on young people, it is notable, she said, that the Church is recognizing a person who used the internet to promote the faith.

Francis has embraced the internet and called it a “gift from God.” Writing to young people last year, he commended Carlo as an example for his use of the internet and quoted him as saying, “Everyone is born as an original, but many people end up dying as photocopies.” The pope added, “Don’t let that happen to you!”

On Monday, the pope wrote on Twitter that Carlo’s example showed that “true happiness is found by putting God in first place and serving Him in our brothers and sisters, especially the least.”

Francis, who has been known to embrace the internet — notably with Twitter and Instagram accounts — has been outspoken about the harmful effects of social media and the depravity of internet culture.

Carlo’s beatification comes at time when technology has been integrated into religion as never before, as online streaming allows the faithful to participate in services under coronavirus restrictions.

Carlo’s life has inspired hundreds of social media pages as well as books and documentaries. YouTube videos show him as a young boy, sticking his tongue out at the camera and goofing around, playing air guitar and singing.

“There’s really nothing extraordinary about his life,” Father Conquer said of Carlo. “Everything that he did you can do, honestly. And that’s what gives us all a lot of hope.”