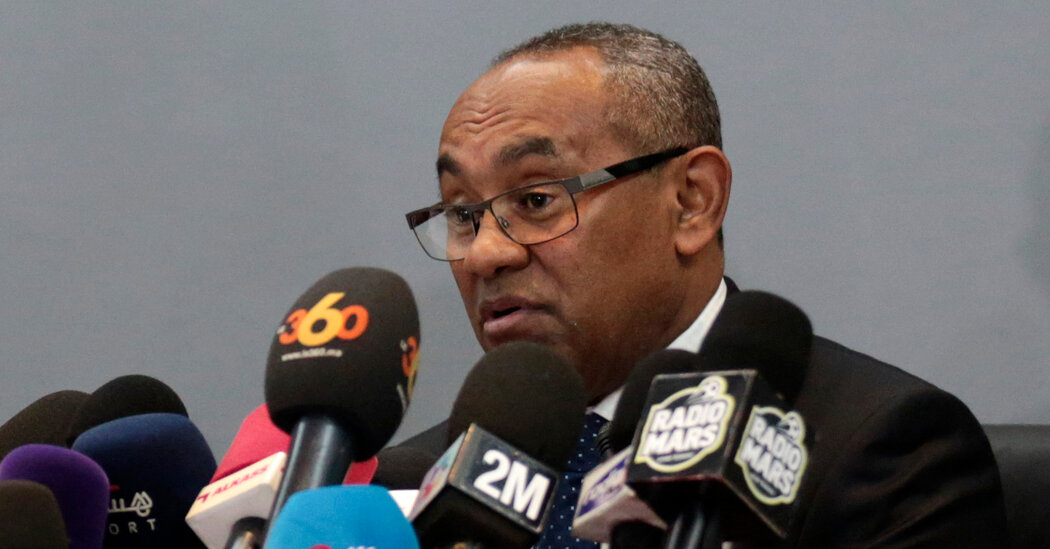 FIFA ethics investigators have asked the top soccer official in Africa to explain why he agreed to revise a television contract in a way that appeared to benefit a commercial partner over his own organization — the latest ethical concern for a governing body that was subject to direct FIFA oversight as recently as February.

The official, Ahmad Ahmad, the president of the Confederation of African Football and a FIFA vice president, and Constant Omari, CAF’s powerful vice president, have been asked by FIFA to provide details about amendments to a television contract with the marketing company, Lagardère Sports. The changes to the deal, which covers all of the region’s top club and international competitions, have the potential to move millions of dollars in losses from Lagardère Sports onto the books of the African soccer body, according to documents reviewed by The New York Times.

The new investigation is just the latest problem for Ahmad, who was briefly detained last year by French authorities investigating allegations of embezzlement and who faces a separate FIFA ethics probe involving complaints of sexual harassment by several female employees and consultants. It also comes at a pivotal time for African soccer, which has lurched from crisis to crisis under his leadership: Ahmad is seeking a new four-year term early next year, and sanctions related to any of the open cases could disqualify him from running.

At the heart of FIFA’s new investigation was the decision by CAF, after discussions led by Omari and approved by Ahmad, to change the terms of a long-term contract with Lagardère Sports in a way that allowed the France-based company to reduce the minimum amount it guaranteed for CAF’s television rights and at the same time shed its responsibility to collect almost $20 million in unpaid fees from a sub-licenser.

In agreeing to take on the risk of those unpaid fees, CAF’s leadership also agreed to pay Lagardère a $6.7 million fee. In effect, CAF agreed to buy the unpaid debt at a discount, trusting that it could recover the full amount itself from a company that had already defaulted on the debt multiple times.

FIFA last month wrote to both Ahmad, who has taken a 20-day convalescence leave after contracting the coronavirus, and Omari, who on Monday stepped in to temporarily fill in as CAF president, asking them to explain their decisions to alter the television deal. If they do not, the men could face charges under FIFA’s ethics code. Like Ahmad, Omari, 62, is a member of FIFA’s governing council.

FIFA declined to comment on the new investigation, citing its policy of not commenting on the work of its ethics committee.

Ahmad declined to comment on the substance of the investigation, saying in a text message that he respected the principle of confidentiality even when others did not. Omari, who has accumulated significant power in African soccer as the confederation’s No. 2 official, did not respond to a request for comment.

Television rights are soccer’s most lucrative source of revenue, and they were central to the criminal case brought by the United States Department of Justice in 2015 against a group of officials and executives in the Americas who were found to have diverted hundreds of millions of dollars of income from broadcast contracts to accounts they controlled. That case has led to a host of criminal convictions, and to new investigations in Switzerland and France related to the sale of World Cup television rights in territories across the globe.

African soccer, long seen as a source of talent and potential revenue, has been of particular interest to FIFA’s president Gianni Infantino, who since his election in 2016 has tried to exert and grow his own influence across the region. He campaigned on behalf of Ahmad during the soccer official’s successful battle in 2017 to become African soccer president, but in the years since Ahmad’s victory the relationship between the men has deteriorated.

Infantino was embarrassed in 2019 when, a day after he said FIFA had moved on “from being toxic, almost criminal,” French investigators detained Ahmad for questioning in an ongoing corruption inquiry. Ahmad was released and denied wrongdoing.

Around the same time, several current and former CAF employees provided internal documents and testimony to investigators in which they accused Ahmad of mismanagement and sexual harassment, and FIFA announced that it would be sending its most senior administrator, Secretary General Fatma Samoura, to effectively take control of CAF. It was the first time CAF had taken such action against one of its regional confederations.

Early this year, though, FIFA was forced to withdraw Samoura and a team of officials it had sent to Africa after CAF’s senior leadership declined to extend its request for oversight. FIFA declared the job of cleaning up African soccer complete, but that same month details of an audit were made public in a 55-page report that revealed an ugly picture of financial chaos and mismanagement inside the African confederation, including millions of dollars in development funds unaccounted for; curious payments to private bank accounts of regional soccer leaders; and lavish spending on gifts and overseas travel.

It remains unclear why FIFA’s ethics committee has taken so long to provide a judgment in its investigations into Ahmad, but if the ethics committee substantiates any of the charges he faces — or rules against him on any new ones — he would be ruled out of standing for re-election next year. That would leave four candidates to replace him as CAF president at an election scheduled to be held in Morocco on March 12.