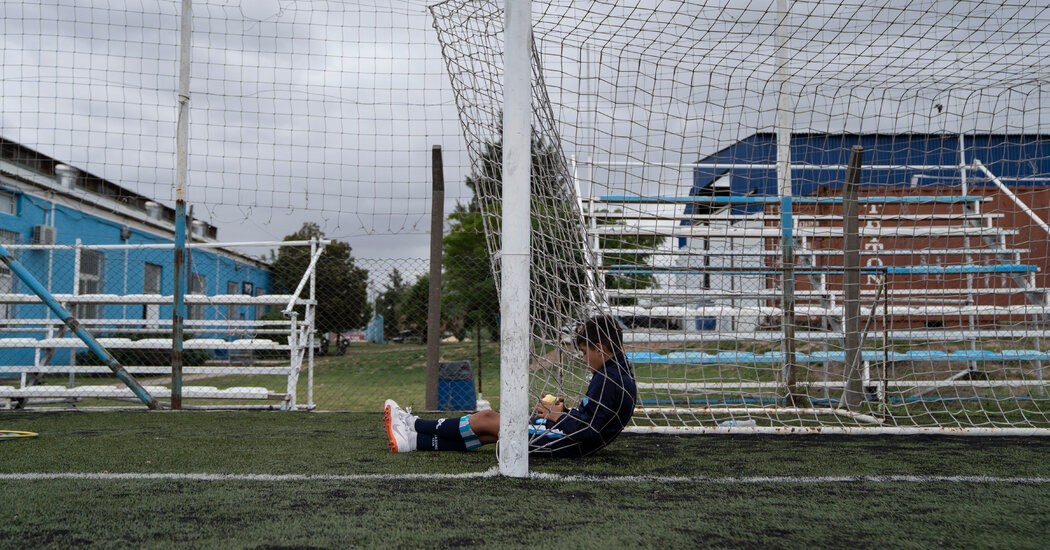 So fast had his star risen that, when the plane carrying the team back to Buenos Aires touched down, Di María barely made it through passport control. “When we landed, he got off our plane and onto the one that took him to Europe,” said Hugo Tocalli, the coach of that team. “Really, straight onto it.”

Di María’s first stop was Benfica, the initial step of a journey that would take him to Real Madrid, Manchester United and, now, Paris St.-Germain. He was not the first member of that young squad to cross the ocean. Three of his teammates — including Sergio Agüero — had already been signed by European clubs. Nor was he the last: Within a year, nine more members of Tocalli’s team had been enticed away from Argentina.

As he spools through the names, it is not hard to see why: Walter Samuel, Esteban Cambiasso, Pablo Aimar from the 1997 squad; Nicolás Burdisso, Maxi Rodríguez and Javier Saviola in 2001; Fernando Gago, Pablo Zabaleta and, of course, Lionel Messi from the team that won in the Netherlands in 2005. Argentina, in those years, seemed to have an inexhaustible supply of impossibly gifted teenagers, ready to take the world by storm.

Tocalli still works in youth development, as part of the technical staff at San Lorenzo. He still casts his eye over countless prospects. And he is still confident that Argentina produces top players. “The talent is still there,” he said. “There are still players here.”

That may not have changed, but something has. A decade ago, 47 Argentine players featured in Italy’s Serie A; this year, only 24 are currently registered. In 2014, the Premier League employed 23 Argentines; this season that is down to 11.

And, as the Argentine journalist Juan Pablo Varsky has noted, roughly half of those — Agüero, Willy Caballero and Sergio Romero among them — are in the autumn of their careers. Their heirs have yet to materialize. Europe, not long ago, took players as fast as Argentina could develop them. Now, it seems, the production line has seized up.

Judging What You Cannot Watch

A few years ago, two scouts from F.C. Copenhagen, the leading Danish team, arrived in Avellaneda — a city just south of Buenos Aires — to watch a prospect playing for Racing Club. The only problem was that they could not work out how, exactly, to get into the stadium.

In Europe, there is a tacit agreement among clubs to make special provisions for scouts: complementary tickets offering a good vantage point, ordinarily among their peers, or in the more tranquil parts of a stadium, like the directors’ box or the press seats. In Argentina, scouting has always been a little more complex. Eventually, the two Danish scouts — with their calls and emails to the club unanswered — had no choice but to buy tickets and sit among the fans behind the goal. It was hardly the best place to assess a potential signing.

The incident inspired Racing to make visiting scouts’ lives easier, but the club’s scouting coordinator, Diego Huerta, said it could still be “complicated” for European scouts to watch games live in Argentina. That stands in contrast not just with Europe but also — much more pertinently — with Argentina’s great continental rival, Brazil.

Brazil — partly by virtue of history, partly because of sheer scale — has long been soccer’s great exporter. In May, a report from the CIES Football Observatory showed that there were 1,535 Brazilians playing professional soccer outside Brazil. Argentina has never been able to match such a figure, of course, but not long ago it was getting close.

In 2014, in fact, Argentina sold more players abroad than Brazil. In the years just preceding that, Brazil remained ahead by only the smallest of margins. Now, though, as Argentina’s production line has collapsed — the CIES found that it exported only 78 players in 2019 — Brazil’s has ramped up again.

Those involved in recruitment in Europe attribute that to two trends. One is the standard of youth coaching in Brazil, which many now regard as on par with that available in Europe. The other is the relative ease of doing business with Brazilian clubs. “They invite you in, give you a tour of the academy, offer you a coffee, talk to you about players,” said the head of recruitment for one major European team. “They are more transactional.”

The effect, at the top level, is clear. Until 2014, there were more Argentines in Serie A than Brazilians. From 2014 to 2018, the same was true of the Premier League. Now, even in Spain, where a shared language has always made it easier for Argentine players to settle, Brazil is ascendant. In 2018, there were 39 Argentines playing in La Liga, and 21 Brazilians. This season, the divide has narrowed substantially: 25 Argentines and 20 Brazilians.

It is tempting to believe that the explanation is accessibility. Brazil’s best teams invite scouts in for a tour; Argentina’s, in some cases, do not even reply to emails. In a fast-moving market, clubs will instinctively favor the player they know more about; they cannot judge what they cannot see. Argentina’s fall is a failure not of talent but of organization.

To Huerta, though, there is a flaw in that argument. “All of that was true 10 years ago, too,” he said. “It is complicated now, but it was complicated then. And the deals still got done.”

Most front offices for most leading teams have, somewhere on their encrypted recruitment software, a list comparing the relative strengths of dozens of leagues across the world. On most lists, the Premier League and La Liga vie for supremacy; Germany tends to be third.

The list functions as something between a crib sheet and an equation, a way of weighting players’ merits across countries and across contexts. If a team is watching two forwards, one in France and one in Portugal, the list enables the team to see what each player’s data profile means in relation to the other.

The analytics firm 21st Club — which supplies data and insights to a number of teams across Europe — has its own model. Brazil’s top flight, Serie A, comes out sixth; Argentina’s Superliga is eighth. “We rate Argentina’s best teams as marginally better than Brazil’s, but there is greater strength in depth at the top of Brazilian soccer,” said Omar Chaudhuri, 21st Club’s chief intelligence officer.

For recruiters, that makes Brazil an easier market to work in. “Leagues with a big spread in quality can be harder to scout,” Chaudhuri said. “When you’re watching Boca Juniors, say, against a weak opponent, it can be hard to gauge how impressive an individual performance really is.”

That problem was exacerbated in 2015, when the Superliga expanded to 30 teams. Though that number has now been reduced to 24, it is scheduled to rise again in response to the financial impact of the coronavirus pandemic.

“It is impossible that the level does not drop,” Huerta said of a league that size. “When teams watch games here, they see eight or 10 teams to watch, and besides that the level is really low.”

That is typical of the way the problem is framed in Argentina, as an issue at least partly of the country’s own making. Huerta points to a variety of factors — ranging from wider economic issues forcing clubs to cut development budgets to the loss of Tocalli and of his mentor, José Pékerman, before him, from the country’s youth system. Tocalli bemoans the lack of foresight among the Superliga’s teams.

“There are only a couple of clubs with projects,” he said. “For too many, the result, even at youth level, is all that matters, not the development of players. They think about today, and not about tomorrow.”

Argentina’s demise, though, cannot be attributed entirely to self-inflicted damage. The existence of those data-driven matrices comparing leagues is proof of a new market reality: Clubs’ horizons have expanded far beyond traditional markets. Teams hailed as cutting edge — Udinese, Lyon, Porto and all of the rest — now regard Argentina, like Brazil, as a premium market. They believe there is better value to be had in Chile, Colombia and Uruguay.

And they know how to find it: sifting through the reams of data provided about those historically lesser leagues, and then using services like Wyscout to watch as many games as they choose. That technological shift has expanded soccer’s horizons: Nigeria now exports more players than the Netherlands. Ghana has more expatriates than Belgium.

At the same time, Europe has industrialized its own youth development. “In the past, you did not have the highly technical German players, the English players, the Spanish players of this level,” Huerta said.

European soccer used to turn to Argentina — and Brazil — for the magic it lacked. Now, Huerta said, it tends to source “combative” players in South America. Talent? It can grow that on its own.

He hopes that the drop in Argentine exports will be just a dip in the cycle, a natural lacuna before the players start emerging once again. “There are some really interesting generations here, players who are 15, 16 and 17,” Huerta said.

Tocalli is right, in that sense: Argentina has never stopped producing players. It is just that, these days, Europe does not need them quite so much.